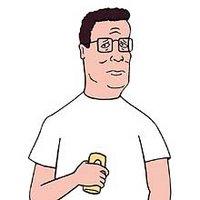 When we evacuated for Hurricane Rita, there were nine humans and four dogs in a caravan of four vehicles. In my car, my traveling companions were Aunt Gladys, Aunt Hazel, Bandit and Prissy. Bandit and Prissy are dogs. Aunt Hazel and Aunt Gladys are humans of the aunt variety. At one point on our way back to Texas from Arkansas, after staying for a week with my brother’s family (five more humans and another dog), my Aunt Hazel, who was riding shotgun, suddenly said to no one in particular, “No one took baths. Everyone took showers.”

Aunt Gladys and I sat there for a while waiting for Aunt Hazel to elaborate on her cryptic revelation. When none was forthcoming, I looked over at Aunt Hazel and said, “And?”

She said, “I don’t know. I don’t even know why I thought of that, let alone said it out loud.”

Granted, we had been on the road for about six hours at that point and had another six hours or so of driving ahead of us. We were all delirious, not knowing the condition of our homes and all; but, it was still a strange thing to say. For the next hundred miles or so, every time it would get quiet, one of us would say, “No one took baths. Everyone took showers.” Then, we would laugh our asses off.

As an interesting side note, the whole time we were at my brother’s house, not only did no one take a bath, no one took a cold bath. I mean, no one took a cold shower. We were washing clothes and dishes constantly and with fourteen people in the house, someone was always bathing. Nevertheless, we always had hot water. My brother uses propane and propane accessories. I tell you what, Hank Hill would be proud.

I won’t even begin to speculate on the capacity of my brother’s septic tank. I still can’t believe we didn’t overflow that sucker with all the good Soccer Mom and Methodist Lady casseroles we were eating. There had to be some sort of divine intervention involved, like Jesus with the fishes or something. That must be it, a good old-fashioned Methodist/Catholic septic tank miracle. I wonder if Rome investigates holy septic tanks.

In my circle of friends, if someone says something that doesn't make sense then they get slapped...hard...across the face.

Seems to me like you should have reached over and slapped Aunt Hazel right across the jaw, that would have woke her up! :-)

You have no idea how much, we your readers, thank you for not speculating on the capacity, (or any other details) of your brothers septic tank.

Gas water heaters have it going on... at least until my first gas bill this winter.

You have to love the weird and apparently random things people sometimes say. One of my favorite office pranks is to send an email (on unlocked and unattended computers of co-workers) to everyone around saying nothing more than, "I really, really love donuts." Always good for some laughs.

I wonder if it might not have been a "holey" septic tank. Thank God it didn't back up.

HEY LAURIE,
Glad you back safe.Hope things are getting back to normal. You and household always to find the fun in a situation, that's one of the reasons i love your blog. The other reason I have with it is the way you manage get supporting pictures in your post. How do you do that????

Gangster - I'm sure Aunt Gladys would have thought it was funny but Aunt Hazel would have smacked me back.

Stephen - You said it!

Amlicar - Aren't you nice! When you do a blog post, there's a little picture on the toolbar. You click on that to add a picture.

Ohmygosh, that was fun to read!

You can write em, Laurie.