Could I get an espresso to go with that bear claw? 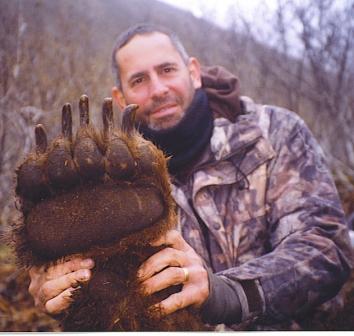 I had a clever comment in mind... something along the lines of "You think his *Claws* are big..."

And then I saw the anti-spam word and it threw me off for a moment...Amazing what sharing only a few letters with the "s" "e" "x" word can do to one's train of thought.

Visual evidence of why you just hand over the picnic basket

Your blog is turning into a regular menagerie of unusual animal pictures. Keep up the good work!

I have eaten bear and it is fat and greasy. So how do they get the name Bear Claw for a pastry that tastes like neither and doesn't even look like the picture above?

Gee, grandpa, your paws are SO big!! Kinda like little red riding hood.

And how many calories does it have? Or , you want that in a bag?

Hi, for your odd pix, have you seen the cat with two tongues?

Ed - You ate a fat greasy bear? Doesn't sound very appetizing. I guess I'll skip it if I'm every offered.

Stephen - He could smack the crap out of Red with that paw, couldn't he?

Anonymous - Oh, that's just wrong. Thanks for the link.

WHY did he kill that bear? What'd that bear ever do to him? I'm sorry, I'm such a huge animal lover, I can't condone any of it...even IF it's done to "control" their population. I think we should give some of the animals, like deer & bears, shotguns, and put a few of our WORST specimen of men out in the deer's environment, helpless and unawares, and let the deer hunt them! I wonder what the animals would hold up to the camera for SIZE?? Look at the _____ on this one!

Mrs. F - I know what you mean. That's the only thing I hate about posting these pictures of hunters and the animals they...I can't even type it. It is so sad.