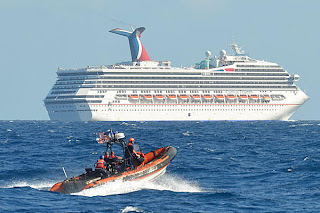 CNN reporter Martin Savidge is catching a lot of flack for mentioning Hurricane Katrina to passenger Rob Kenny as a comparison to their ordeal on the Carnival Triumph.  I agree that it was an unfortunate comparison, but I understand where Mr. Savidge was coming from.

We didn’t evacuate after Hurricane Ike and several times during the Carnival Triumph event, I thought their situation was comparable to our situation.  They had no power.  They had long lines for food, as we did for gas and water.  They were disconnected from the outside world.

Although the cruise ship passengers didn’t lose their homes as some did in Katrina, when I compare their situation to the aftermath of other unfortunate events (snow storms, tornadoes, hurricanes), they also had the added elements of possibly dying at sea while surrounded by 4000 strangers and occasionally stepping into urine and poo.  Other than dog accidents, our hurricane event was mostly urine and poo free.  We were also in the relative comfort of our own homes rather than on the open sea sleeping in a hallway...with 4000 strangers.

Good for Rob Kenny keeping things in perspective, but Martin Savidge shouldn’t beat himself up too much.  The analogy was apt.  He just chose the wrong natural disaster for his comparison.