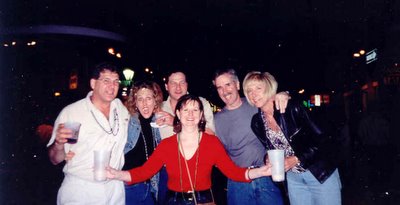 Last night I went to my sister's house for my 19 year-old nephew's belated birthday party (chicken and sausage gumbo!) which had been postponed due to Hurricane Rita. As usually happens, the children (age range 16 - 25) and grandparents (ages undetermined) went their separate ways around 9:00 p.m. and the middle generation had a party of our own.

We mostly swapped hurricane stories but, as always, the conversation turned to our upcoming trip to New Orleans in March. We half-heartedly threw around suggestions for alternate locations for the March trip because of possible problems since Hurricane Katrina. We spoke of New York City, Cancun, Las Vegas, Key West, Galveston, Austin and Houston and many others.

Each location had its attractive features and we would love to go to all or some of them as a group one day. However, the question that kept coming back up each time we spoke of a fun city to take our rowdy crowd was this: Can we drink in the street?

Can we drink in the streets, seems to be an unusual reason for your choice, have fun.

Popeye - They haven't been lucky lately but it's too early to tell what good will come from their tragedy.

Peter - You obviously haven't drinken in many streets.

I know you can't wait for that trip. My aunt sent me a picture of her house and my grandmother's. What a mess.

Stephen - I feel so bad for all of those people.