At this point, I like Judd, Helen and Howard.

McCrae is okay, but the Amanda connection is annoying.

I like Andy, but he's beginning to be too hyper all over the place.   He needs to scam some of Aaryn's Adderall.

Elissa is a hot mess and I would really like to meet her and Rachel's parents.  I have questions.

Spence is, in Big Brother House terms, a shady fuck.

There is nothing I can say about Jeremy and Aaryn that has not already been said.  Evil incarnate.

Kaitlin is less evil, but still incarnate by association.

Gena Marie is a tad schizo, but she is who she is and I can appreciate that.

Nick could go all the way, but it's way too early in the season for all the shenanigans happening in this house to be able to pick a winner.

I don't like Candice and Jessie just on the basis of general unlikeableness.

I didn't like the Jersey/New York blonde chick (GinaMarie) until I watched some BB After Dark.  Seemed like a normal person.

The Beaumont girl (Jessie) who was so annoying on the show, hardly said anything “after dark,” so I don’t know what to think about her.  Did not like her at all on the show.

“After Dark” on TVGN censors the cursing which is very distracting, so I don’t think I’ll be watching it much.

The girl who was the most annoying on the “After Dark” portion was the real estate agent chick (Amanda).  Would not shut up.

Everyone else was really normal and likable, which surprised me.  At this early stage, I'm usually ready to evict half the cast immediately. 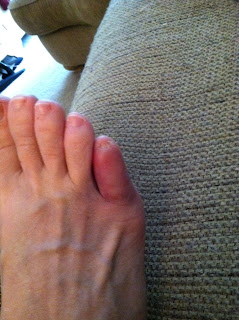 Injured my right pinkie toe while packing for a weekend trip. No outdoor walking or running for the foreseeable future.