Food for Thought: After the Storm 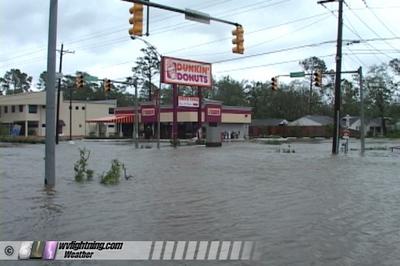 The above picture is off of a site that has some great video of Hurricane Rita hitting Beaumont.

Also, I don't know how many Beaumont area people read this blog but I have some things I've been thinking about and want to share.

I hope you're wrong, Laurie. That sounds scary.

I've been catching up and just now saw the falling George W. I loved the falling girl but this is sooooo much better! Thanks!

Will this be all straightened out in time for Hurricane Zebra?

OMG, I hope you're wrong about that burn ban stuff... being that we live in HC and my mother plans on burning a HUGE PILE OF CRAP this weekend... oh well, I won't be here. Perhaps I should pack up for this weekend like I did for Rita?

we'll keep watching; although it's nice to be far-sighted, I hope you're wrong

Before I went on-line to catch-up on my favorite blogs, I noticed a small black box on one of the other secretary's desks. It is an invite to a halloween party in Houston (you know the kind the upscale law firms send out). The theme is "Disco Inferno," and it comes with a real lighter that has "Burn Baby Burn" engraved on one side of it. Then I read your blog about the burn ban being lifted. . .OMG! xoxo jp

Laurie, if you're right about your premonition, not only will you have a very promising future in fortune-telling, but your blogs will be even MORE important & informative...kudos to you as well on the gratitude that needs to be expressed to ALL who've been so helpful throughout this crappy time! I hope YOU don't prove to be TOO helpful, tho. :)

Old Horsetail - I sure hope so.

New Mrs. F - Maybe I can get a spot in Jackson Square and tell fortunes. Hell yeah!

Fascinating stuff! The Dunkin' Donuts is only a few blocks from where I live and I had no idea there was that kind of water in that particular area. This is what I missed while "evacuated" to Newton County. Thanks Laurie, it is some spectacular video.

Dick - I couldn't believe it either. I hope your house did okay in the storm.