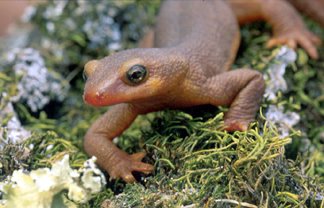 I hate bugs. I never liked bugs but I don't remember actually obsessively hating them until a science teacher in the seventh grade required a bug collection from each student. We had a list of about twenty bugs (including cockroaches!) that we had to find, trap, suffocate in a jar and pin to a piece of Styrofoam along with their scientific name. It was an unimaginably gory assignment from which I have never fully recovered. If there is such a thing as karma, that teacher has to deal with nasty infestations of the insect variety on a regular basis.

I don't mind lizards so much as long and they stay outside. If they come in my house though, that's a chameleon of a different color. Shortly after I moved here, I realized I wasn't alone. The house came with its very own newt. The newt and I eventually had a rather nasty run-in involving nets and brooms and flashlights and bug spray (there's no such thing as newt spray...I looked). At one point, I whacked that sucker and he went one way and his tail went the other. I flushed the still wiggling tail down the toilet and eventually subdued the newt and whacked the shit out of him with the broom. I scooped his limp, and probably lifeless, body onto the dustpan and threw him over my patio fence. I'm pretty sure he was dead; but, I prefer to think I just stunned him. Denial works well for me.

When I see an interloping reptile or insect in my house, I freak out and have been known to use an entire can of bug spray on one bug. I actually drown them more than poison them. If the critter gets away from me, say behind a couch or under a dresser, I will obsess over that piece of furniture for days. I realize that the roach, spider, lizard, junebug, cricket, or whatever, is hell and gone from whatever he ran under or behind. However, in my mind, he's still there taunting me and waiting to make his move.

Labels: freaking smooth out, In Laurie's Brain
Posted at 6:18 PM

She turned me into a newt.


And the secret word is: "rrzuoy."

Yeah, Newt Gengrich is an ass!

I've been traumatized by reading this post. Such graphic description of horrific violence.

I'll be sending my therapist bill to you.

Wang Chi - Oh, God! I hope I didn't smack Eric Idle. Or, was it Michael Palin?

Gangster - The King of all Newts!

Cute little guy. Still wouldn't want him in my house, though. Have to draw the line somewhere.

Shame, shame,haven't you heard of live and let live, for the newts at least, now snakes , thats different.

If I can't "hear" the bug, I don't care if it's there. But when it starts clicking, buzzing, or making chomping noises, it gets dead.

My brother keeps several aquaria, and when he lived with us, he also had a newt. The newt went missing but showed up, entirely dessicated, under the fridge, 3 floors down from where he had lived. I revered him as I would one of the intrepid Arctic explorers.

Since I used to be a pest exterminator, I am at least familiar with other people's fear of insects. On the other hand, I have to admit to an ocassional neurotic relation to lizards similar to the newt-fear you relate. I've broomed and sliced and diced lizards that would have been better off if they'd remained outdoors!

Of course, any Larry Jones should be instantly squashed! Ha! Joke, just a joke!

I don't care for bugs but I really don't like rodents. Once, I went into my basement and saw a mouse on a shelf. We both screamed at each other. I recovered but the mouse died right there on the spot (heart attack, I suppose). Among guys, I am the king of eek.

Larry - I really did feel bad about (probably?) killing him. They ARE cute...if they're outside.

Peter - I don't know what I would do if a snake got in here. Time to buy a gun I guess.

Tanda - Oh, God! When they're rustling around making rustling sounds, that's the worst.

Lorna - Oh, that's great...an intrepid arctic explorer. You need to blog about that.

Comfort Addict - Oh, my. Don't even get me started on rodents. Yep, I'm getting a gun.

What's all the problem about them reptiles, insects and rodents. I oftenly have some in my room and they don't bother me a bit.

I would however freak out if you put a crab in my my head. I hate crustaceans.

Euian - Crustaceans are best boiled. I love your name and your blog is beautiful.