Bitch Moment of the Day: "Who cares?"

My Bitch Moment of the Day is directed toward the geniuses who go into online message boards, news article comment strings and Facebook conversation posts that pertain to such things as American Idol, Charlie Sheen and Royal Weddings to post the brilliant and insightful observation of:  "Who cares?"

Guess what, asshole.  We don't care that you don't care. You think we don't have a life?  I would say you are the one whose life we should be questioning if you have nothing better to do than cruise the internet for posts and articles about things you allegedly don't care about and then globbing up the comment string with your two words of brilliance.

You want to share your disgust about Charlie Sheen or your boredom with the royal family? Knock yourself out.  Posting the idiotic and arrogant "who cares" is just plain lazy, not to mention unoriginal.

And, it pisses me off.

Not that you care. 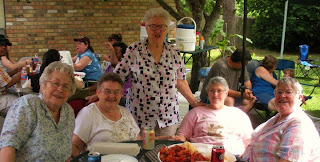 ﻿I will soon leave on a cruise with my mom and her four sisters who range in age from 65 to 80 years old. I have been instructed by Aunt Dolores, “the oldest,” that I am not to introduce the group by saying, “They’re all sisters. SHE’S the oldest.” I told her that I’ll tell everyone they’re quintuplets.  All born simultaneously. Like chihuahuas out of a clown car.  A true miracle of nature.

In the last few weeks, two of the sisters have had dental emergencies involving broken teeth. My sister Bonnie asked the other three sisters if they had experienced any broken teeth recently. Aunt Hazel gave Bonnie a puzzled look and said, “If I break a tooth, I just drop ‘em off in the morning and tell them I’ll pick ‘em up after work.” Note to self: don’t worry about Aunt Hazel’s teeth.

Yesterday, mom was describing our cabins to three of her sisters. I wasn’t really listening to the conversation until I heard my mom say, “There’s a couch in the room, so if anybody picks up a man, the other sister will have to sleep on the couch.”

Aunt Gladys said, “Man? Hell, I’m on vacation. What do I want a man for?” She’s one of the married ones.

Aunt Dolores, “the oldest” of the quintuplets, said, “Bring them back to the room? That’s crazy. If anybody finds a man, go to his room. You people aren’t thinking straight. Don’t bring him back to your room where there are four other women.”

I thought I was going to be concerned with broken teeth, broken hips and blood sugar levels. Now, I find I’m going to have to worry about curfews, bed checks and booty calls.

I think I’m going to need a bigger journal.

***
I would like people to be implanted with chips like the ones implanted in dogs and cats which identifies their owners.  I went to a funeral earlier this week and my friends and I were trying to figure out who some of the people were.  I thought how much simpler it would be if people had implants with their family tree on it that we could scan from a distance with our smart phones and know who everybody is.  What about privacy you ask?  Is anything really private anymore?  I'd rather people have my accurate information than make stuff up.

***
I would also like to have all of my medical information on another implanted chip so that when I go to a new doctor I won't have to fill out all those stupid medical history forms ever again.


***
When I was an AT&T customer, I was constantly bombarded with requests that I go "paperless."  I like paperless.  I always go paperless when I'm given the option.  So, of course, I went paperless.  Now that I've cut the cord with AT&T and no longer have a land line telephone, I get at least three non-paperless mailings a week from AT&T begging me to come back.  WTF, AT&T?  I'm now begging you to go paperless and leave me the hell alone.


***﻿
I was born and raised Catholic, but I do and don't do lots of things that might not get me into Catholic heaven right away:  I'm divorced, I used to use birth control, I don't go to church every week and there are all of those sex things that I won't mention because my mom and my son read my blog.  If my fellow Catholics can't eventually pray me out of purgatory and get me into Catholic heaven, I'm hoping I can get into Methodist heaven.  I know people there, too.

2 WITTY COMMENTS
Labels: In Laurie's Brain, Thoughts On the Day
Posted at 3:09 PM

I'm going to tell you people one more time.  After you park your car in the parking lot where I park every day, do not...I repeat...do NOT...walk out of said parking lot right smack in the middle of the driveway that I'm trying to pull into so that I can park in that parking lot.

I won't run over you today.  I might not even run over you tomorrow.  However, mark my words, one of these days I'm going to be up to my ears with dumbasses and I will run over you.  Intentionally.  With malice and aforethought.

I love the sound of a sizzle.  Water accidentally hitting a curling iron.  A coffee pot being put back on the electric burner at the office.  Checking the oil in a frying pan or an iron with a sprinkle of water to see if they're hot enough.  Bacon.

I can't explain it.

When Ava gets in the top of her wooden swingset, she goes to the side, leans out ever so slightly and yells, "Top of the woild!"

I love that, too.

1 WITTY COMMENTS
Labels: In Laurie's Brain, Thoughts On the Day
Posted at 12:48 PM

March (and a little bit of April) Madness 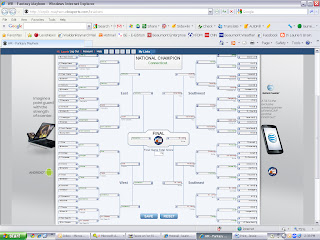 I won the office March Madness Bracket contest!  No money.  Just cookies.  That's my bracket up there.  I base all my picks on instinct and blind luck.  I rock. 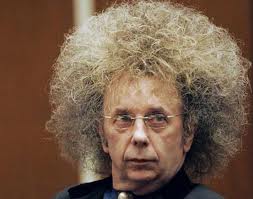 I'm convinced that everyone would look better with natural hair.  No more weaves.  No more perms.  No more color.  All a person needs is a good haircut, shampoo and conditioner.  I think people would be amazed at how great their natural hair really is.  Most women haven't seen their actual real hair since they were about twelve years old. 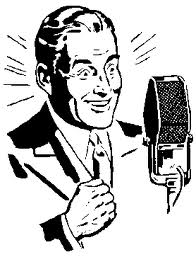 I'm convinced that the world would be better without chatty disc jockeys.  I've posted about this before.  The only information I need between the music is the name of the song and who sang it.  Even that I can find on my own now with the flip of a Google.  Don't even get me started on the "morning zoo" faction of the radio world. 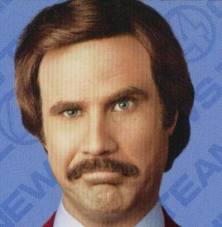 I'm convinced that we don't need news anchors.  That goes for local, national and entertainment news, especially entertainment news.  I read recently that a station in Houston has gone back to the old newsreel style of reporting the news.  Sounds fabulous.


* * *﻿
My conflict arises from the fact that some of my very good friends hold these very same jobs that would be eliminated in my hateful scenario.  Most of the people who hold these jobs are not making a killing in their chosen profession and they've spent most of their lives dreaming of being a hairdresser or disc jockey or anchorman and training to reach that goal.