How My Cousin Came to Be 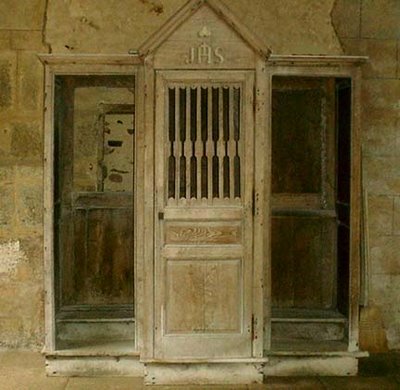 While my dad was in ICU in the hospital in Houston, only two of us could be with him at a time. While waiting for our turn to go in to see him, my dad’s cousin and I were rehashing old family stories in the surgical ICU waiting room. He asked me, “Did you ever hear about how I got here?”

I said, “Do I want to hear about how you got here?”

My dad’s cousin is my age and was born about ten years after his older brother and sister. In those days, Catholics were much more strict about following the rules regarding contraception. Aunt Gert was sure of two things. She wanted to go to Heaven and she didn’t want to have any more kids after the first two.

Being the good Catholic she was, she found a priest who didn’t speak English and would go to him for confession every Saturday and confess that she was using contraception. She would then pray whatever penance he gave her and, on Sunday, she would go to Communion sin free. Monday, the whole sordid process would begin again.

This went on just fine for many, many years until the priest who couldn’t speak English left the parish. Suddenly, one Saturday, Aunt Gert found herself in the confessional not only confessing about the contraception but about her weekly confessions to the Spanish priest. The new priest was not amused. He explained that when you confess, it has to be with the sincere intention that you will not commit that sin again.

For penance, the priest had her say about a million Our Fathers and Hail Marys. As if that wasn’t enough, as an added little bonus (we call it lagniappe here in Cajun country) God gave her Mark. That proves right there that God has a sense of humor. The silver lining is, based on my experiences growing up around Mark and his mom, I’m sure Aunt Gert earned her way into into Heaven with plenty of penance to spare.

What a great story

Funny! I am doing about 10000 things that good Catholics should not do, however I am not Catholic. BUT Brian is. He is going to be in trouble when/if we ever have to talk to a priest about a Catholic ceremony!

Oh yeah - *I* am on the planet because one Sunday afternoon in late 1979 the Dallas Cowboys were losing to the Pittsburgh Steelers and my parents decided not to watch the game...

Good story Laurie, I guess if we all knew why we were here some of us would get a shock.

Jen (Part 1) - That will give you some good blogging material.

Peter - My family has a story about how my brother came to be but I'll spare you the details.