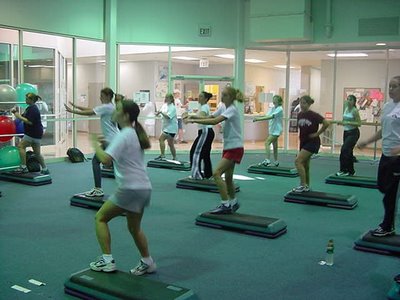 I read something recently that said if you try to lose or maintain weight by eating a low calorie diet and not increasing your activity, you are destined to fail and have setbacks because that's just not much fun. However, if you increase your activity doing something you enjoy, you'll be healthier, have more fun and, as an extra special bonus, you'll actually lose weight while still eating the foods you like. Duh.

What with being so uncoordinated and all, I haven't decided exactly how I'm going to increase my physical activity, but I've found something that most of you probably already have access to and don't realize. If you have digital cable and have Digital On Demand, go to Digital On Demand and click on Exercise/Fitness. You will be connected to the multitude of choices of Exercise TV.

These programs are all free and there are dozens of different types of exercise programs to choose from including tai chi, belly dancing, afro-brazilian dance, hula dancing, toning, Miracle Mile, cardio and kick boxing. The list goes on and on and changes constantly. The best part is, if I get bored or don't like the program, I quit doing it and switch to another one. I can't do that in the gym without people looking at me funny. Not that they aren't already looking at me funny anyway. Really. I'm a total klutz.

I think I'm also going to buy some sort of exercise/weight machine to install in my garage so I can sweat in private and I don't have to share. I guess I better get me one of those lovely "I've fallen and I can't get up" necklaces, too. You know...that whole klutz thing.

You're so right about gyms. I'll attempt to move around (exercise) anywhere if the music is right and loud! It is the getting started that is hard, after that the music becomes the motivation. Someday I will get back to it. Bless you, love your blog.

I used to have an elliptical cross-training machine that my daughter got when we started to plan our move. I LOVE the cross-trainer---it's so easy on arthritic knees, but you do need a good minimizing exercise bra, or it can get painful. So far, I have only hit myself in sensitive places with the demon arms of the machine once. A month.

As soon as I read this I went and checked my On Demand channel. Sadly, no Fit TV on local Charter Cable. However, it seems I do have Karaoke on Demand, so that might help keep me in shape.

Invest in an Ipod

That machine usually has a place to put a book or magazine so you can read while you work out.

Don't deprive yourself of anything you are craving...just don't over do it.

Cut everything you eat in half. Most places (if you are like me and eat out alot) have half orders or lunch portions. I'm big on half orders or spliiting big entrees.

Now I know I don't do alot of this because I am not getting any smaller. But Maria has done alot of this stuff and she has been losing and/or at times maintaining. She eats alot of veggies.

Also with my many health issues its not always a good idea to work out. We are looking to join another gym again. We were members until the 24 hour fitness across the street opened.

Think Off - Thank you. Good luck with you weight loss program.

Lorna - I'm going to have to check into that elliptical thing.

Larry - I would love to have karaoke on demand! I'm calling Time Warner this afternoon.

I feel the same way about gyms. We have an excersice machine growing dust in the spare room too. I bought one of those excercise balls, the big ones that you sit on. I love it. I got the one with the exercise DVD's that go with them. You get a really good work out in a short amount of time. It might help with your coordination too! :-)

Sadly, I've been "getting ready" to start a fitness program for 25 years. I have several sport bras, and a brand-new pair of Nike Air's (which are actually 3 yrs old, but never used). My intentions are always honorable. However, the excitement seems to fade before I actually put my workout plans into motion. I must say, though, that if I'm going to lay on the sofa and watch hours upon hours of FitTV, there's nothing else that I'd rather wear than my well-made, comfortable sports bra, and an over-sized tank top. I might even dig those Nike Air's out of the closet and set them on the floor in front of the television so that they don't feel left out! Ohhh. It's 10:00. Time for my chocolate & Coca-Cola break! See ya. Poodles

Whew. Just looking at that picture made me smell tired.

I've never worn a sports bra. I've been to plenty of sports bars, though.

Shelli - I can't imagine that the big ball would help me since I would spend most of my time falling off and getting back on.

Dave - Glad to hear you've stayed out of sports bras. Wait, that's not what you said, is it?

There are other people in gyms, that is the problem. Same with pools. I love to swim but not getting run into by other people, or even touched by them. When its warm enough I swim in the lakes around here in the evening, only guarded ones though.

You can gain weight exercising by the way, but you usually lose volume which is what people actually notice. I mean how many people physically pick up their friends to see if they have lost weight?

I exercise quite a bit but that is so I can keep the mobility I have spent years in PT to reacquire. I walk a variety of terrains every day, lift 20-35 lb machines every day and take belly dance class once or twice a week. Class is 1.5hr long.

I have a pilates reformer that I go through stages of using, I am not using it now, but am clearing space to. When I use it I do it 2-3 times a week. I really like using it, it just takes up so much room, its 85 inches long, so when I need the room for something else I fold it up and put it away, then it takes a bit to get it back out. I got it originally when I was on crutches for several years so my leg muscles wouldn't atrophy. It was expensive then, but now they are much less. They all are 85 inches long though.

I had a exercise bike which I never used, it was just uncomfortable, and a rowing machine I liked a lot until I had my last car accident and couldn't use it.

As for machines, I would pick rowing, pilates reformer and a cybex lat pull down machine because those are the ones that feel good to me. I could also use a tread mill and an endless pool (with nice lifeguard ;-) )

I have tapes for belly dance, and they are good for practice in between class but not that great for learning. I don't mind going to belly dance class for some reason even though there are other people there, its actually fun, we laugh a lot. Everyone has something they can do and not do, being skinny, "fit", traditionally coordinated doesn't seem to give anyone an edge, and actually having a belly of some sort helps. No hips and/or belly and aftermarket breasts seems to make it harder. Having only women seems to make it less stinky, I suspect having the opposite sex pheromones floating around makes everyone sweat and/or stink more in gyms.

I used to go to Curves with some work out buddies. When one of them lived across the street I would meet her outside at 7am and off we would go, 3x a week, but given my own devices I would not get up so early so when she moved I stopped going and it cost money. I liked Curves because it was circular, there was no competition, smells were minimal and it was quick. I didn't like that their were some machines I couldn't use due to various injuries, esp after a tore my hamstring in two places a while back in an early morning water/kitchen floor accident. Most people who have not had two serious car accidents plus some leg ones would be fine there. They have this stupid weigh in/ measurement crap and a no sandal rule, but I just ignored that and it was fine. First thing I notice from going there was toning in my forearms but YMMV.

I would be happiest swimming in a poll without many people though. No people and no swimsuit would be even better ;-)