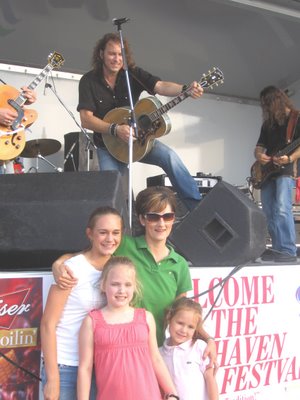 We got there about 1:00 p.m. and saw four of our favorite local bands: 9 Station Drive, Jimmy Kaiser Band, Cam Pyle Band and Zona Jones. We had our blanket spread out and our little collapsible table to hold our cold beverages and we enjoyed the bands while waiting for the delicious John Corbett to appear.

We had our blanket over to one side so we could be in front of the second stage with intentions of moving in front of the main stage later. Somehow, we got distracted and held our little ground in front of the side stage until we were rescued by one of the guys from my office who was there with his kids and his sister and her family. They picked up our crap, grabbed a piece of plywood that was keeping the ground from getting too muddy and we all moved right in front of the stage. That's what friends are for.

John Corbett and his band were great. His guitar player has played with the Stray Cats and was a blast to watch. As for John Corbett, he was as adorable and friendly as any character you've ever seen him play. He talked and interacted with the crowd for the whole show and stayed after to visit with everyone and sign stuff. If you have a chance to catch his show, just do it.

I'm having trouble uploading pictures tonight but you can check them out on Flickr either by clicking this link or going over to the box on the sidebar. 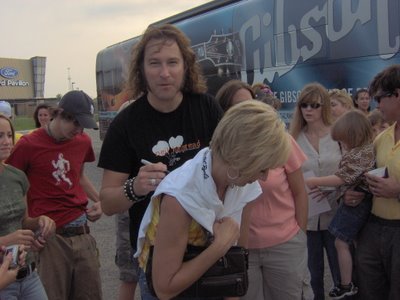 yummy. :) (BTW, I mean the crawfish AND John Corbett.)

ADORABLE is a good word.

Aaahhhh! He is TOO cute! I've enjoyed him since Northern Exposure and I sure do enjoy him still...the long hair is awesome. Did you know he dates and lives with Bo Derek? Another example of two beautiful people getting to enjoy each other day in & day out...life just isn't fair.

Lorna - He was everything you would expect.

Shelli - Zona was great, too.

Ok..I watched him on Sex and the City and he looked so much better on that show then he does in these pictures. What's with the long sideburns??
I have to admit when I heard he was no longer going to act so he could concentrate on his "music" I thought he was crazy.
Good Luck John!

Zina - In person, he was as gorgeous as ever.

He's at the Country Music Awards which I am watching right now because I do like award shows, and I'm going stir crazy from being LOCKED IN MY HOME Like Martha Stewart! At least I don't have the ankle jewlery!

Zina - You would like them if you saw him in person. He's a doll!