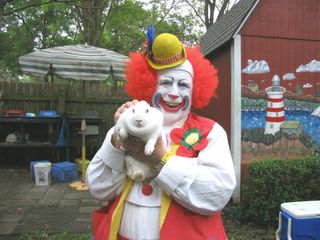 Did I forget to mention that my dad is a professional clown and has been since my 4th birthday party because my parents didn't want to pay for a real clown and then all the parents wanted him to be a clown for their kids' parties and that he is also a magician and a ventroliquist and was somewhat of a local celebrity doing pantomine and being the master of ceremonies for lots of local functions along with working at the Texaco Refinery in Port Arthur for about 40 years before retiring but he is still a clown and we're afraid he'll drop dead at some kid's birthday party because he just won't quit and that will traumatize the kid for life?

I thought I mentioned that.

Yeah well, that won't have been the first time he traumatized someone!

can you say that entire post without stopping for breath? Just wondering.

clowns have always scared me - not to dis your dad or anything. Just never understood why folks thought they were funny...

Poor Zina! Dad loves you too!

Birdwoman - a lot of people are scared of clowns and when you actually think of the concept (makeup, loud popping things, crazy antics), who can blame them? Thanks for popping in and leaving a comment!

It was those damn ventriloquist (sp?) dolls...they still freak me out today....sort of like clowns freak out those people that read that Stephen King book!

"His appetite for work was so voracious that few were surprised that his death came on stage, doing what he loved. And such was his reputation as a relentless joker that when he collapsed during that televised show, most of the audience thought it was just another of his gags."

Let's hope that your Dad lives long(er) and continues the funnies... and that, if there IS an afterlife, he doesn't get there to be told "only kidding!!!"

Deek, that's great! I can't wait to show that to my family.